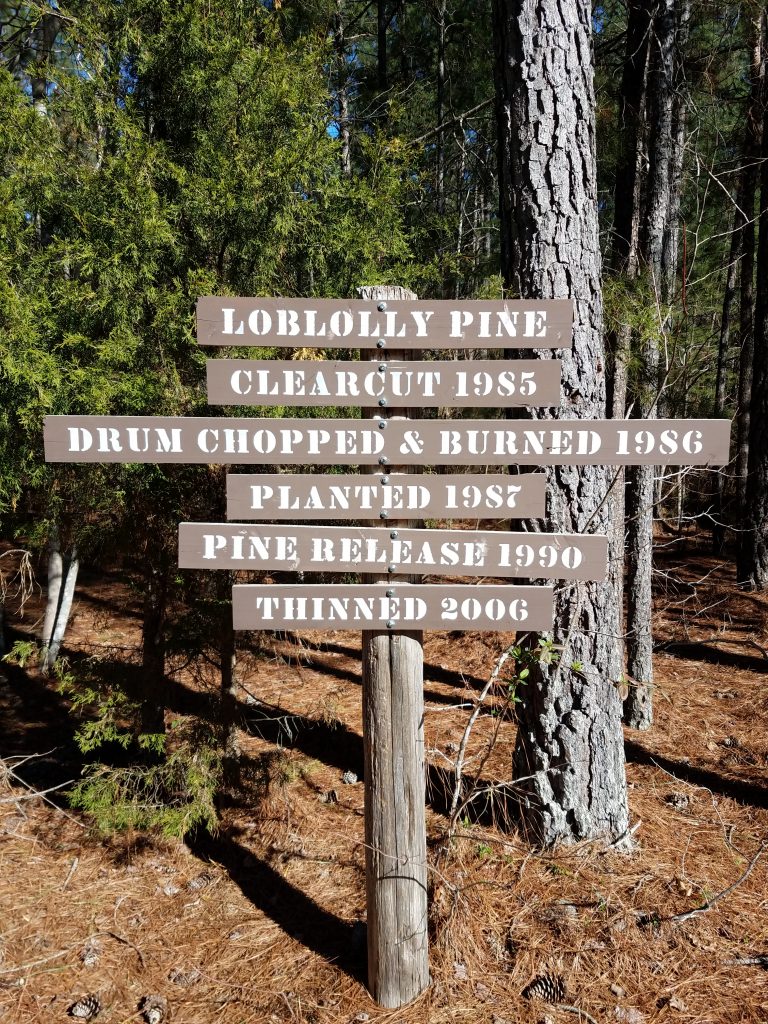 Throughout the Duke Forest you will come across our brown silviculture signs. Silviculture is the science (and art, as our Assistant Director Jenna Schreiber likes to say) of growing and cultivating trees. Silviculture signs are placed on the edge of many forest stands where management activities have taken place. The stands are a historical record and a dynamic educational resource to help students of forestry and the general public interpret the plant life and land history beyond the signs.

The signs typically describe the dominant tree species grown in a stand and the successive management activities, including the year in which they were performed. For many stands in the Duke Forest, you might see management activity extending back 50 years or more. Because regeneration of forest ecosystems happen at a much slower pace than we humans are used to interpreting, these signs can be very helpful in understanding forest succession.

Below is a glossary of the terms you will see on our silviculure signage. We hope it helps you see and understand the Forest around you.

Boardfoot (bd.ft.) – A commonly used metric for describing the volume of saw timber that can be produced from a tree or stand of trees. One board foot is equivalent to a 12 inch x 12 inch x 1 inch piece of wood.

Bark Beetle – A group of beetle species whose life cycle involves burrowing in and feeding on the nutrient-transporting tissues beneath a tree’s bark. Certain species typically persist in the forest with little threat to timber, while others like the Southern Pine Beetle can cause significant economic damage and impact forest health.

Clearcut –The removal of all trees from a stand. The full sun resulting from clearcuts encourages rapid growth of seedlings. By maintaining a single age class within a stand, clearcuts allow for efficient management of some forest types.

Drum Chopped and Burned – A means of preparing a site (also see Mechanical Site Preparation) for effective establishment of tree seedlings. In drum chopping, a bulldozer pulls a large, bladed cylinder to break down woody debris. Burning additionally clears the debris after it is allowed to dry. This process returns nutrients to the soil, and limits hardwood competition. 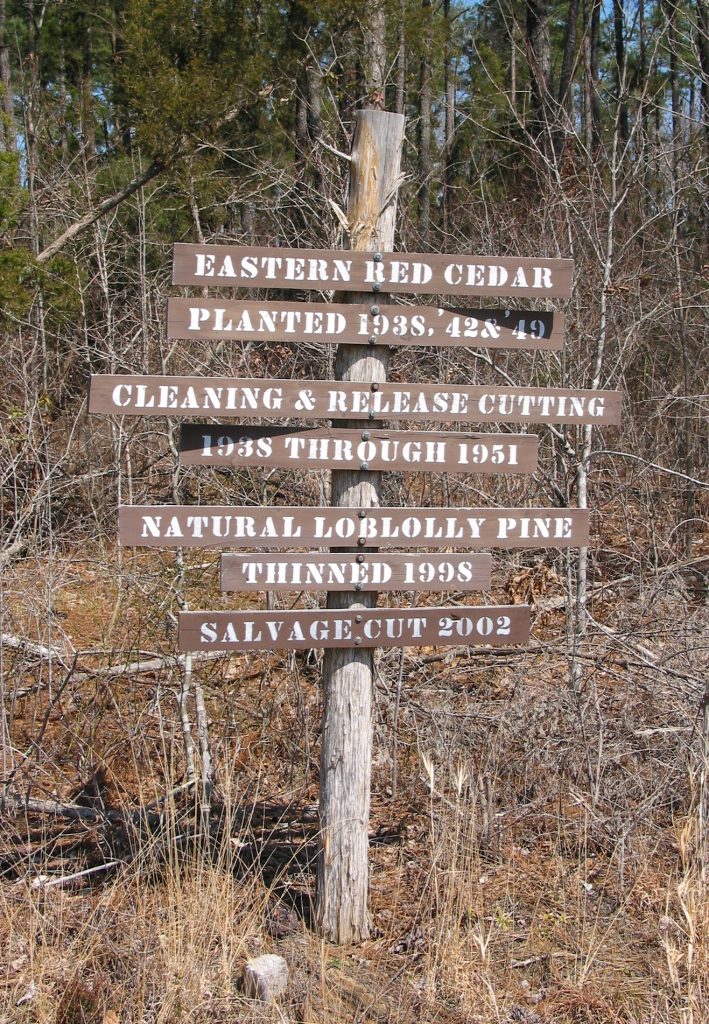 Eastern Red Cedar- (Juniperus virginiana) One of the primary species that colonizes old fields after agricultural abandonment. While eastern red cedar is not typically grown for saw-timber, its rot-resistance makes it an excellent material for fences and signs. All of Duke Forest’s silvicultural and road signs are sourced from eastern red cedar. The berries of this tree are a favorite food for many bird species.

Helicopter Salvage Logging – Used in salvage operations (see Salvage Cut) where a stand is less accessible to ground equipment. This technique was used in Duke Forest after massive damage from Hurricane Fran. 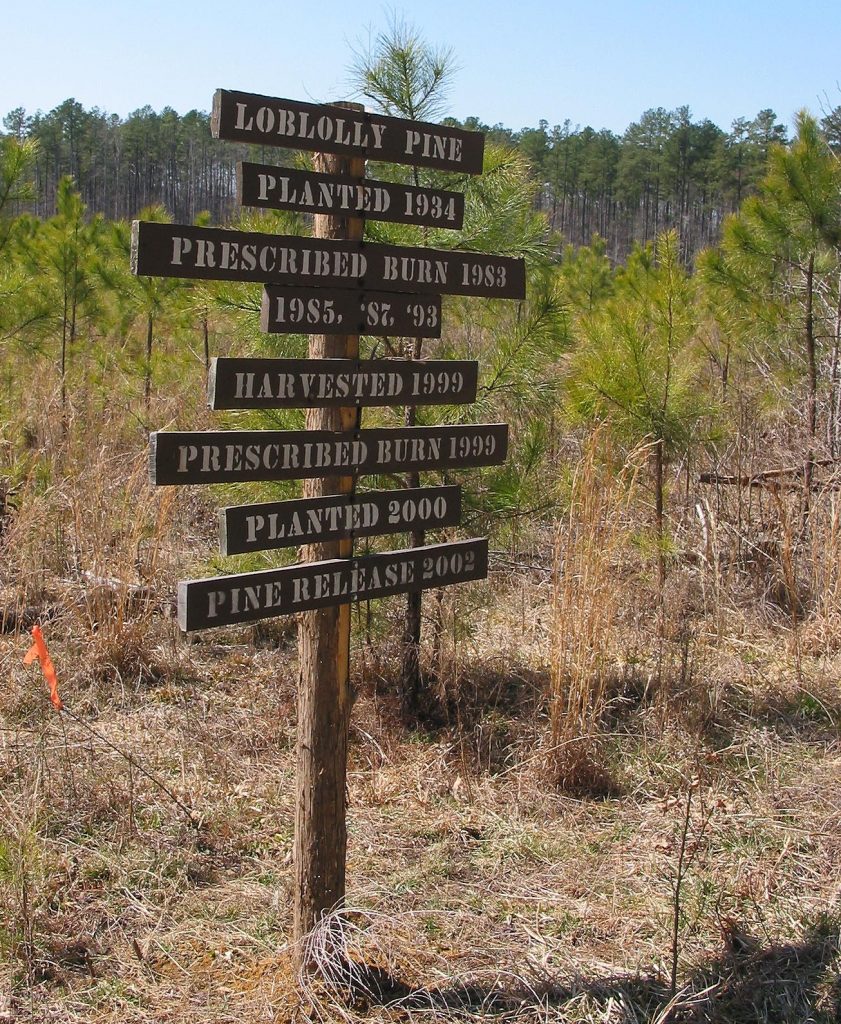 t for revenue-generating operations. Loblolly pine is the most common merchantable species in the Southeast where it produces saw-timber, poles and pilings, paper pulp, as well as chips for various products and energy production.

Longleaf Pine –(Pinus palustris) The state tree of North Carolina, this species is specially adapted for the fire-prone ecosystems of the eastern Coastal Plain and the Sandhills. In those regions, it serves as a cornerstone species for restoration work to support a number of declining wildlife species. While historically important for production of naval stores like tar & turpentine, its primary markets today are the timber and pine needle production. Situated just outside of the species’ native distribution, Duke Forest manages only a few stands of longleaf pine.

Natural Loblolly Pine– A stand was reseeded from nearby parent trees and was not planted.

Natural Regeneration – The seed source for young trees comes from natural seed-fall from parents within or near the stand. Naturally regenerated seedlings and saplings are dispersed randomly in a stand and maintain the same genetics as the parent trees. In Duke Forest, natural regeneration is more common than planting, even for pine species.

Mechanical Site Preparation – A number of means of preparing a stand’s soil and litter layer for planting or natural regeneration, including drum chopping, blading, and mulching. These techniques attempt to prevent competition from previously established root systems, as well as create a suitable soil for establishment and growth of young target trees (usually pines).

Old Field Pine – A stand whose trees were established by natural succession after agricultural abandonment of an old field. Many of the stands in Duke Forest got their start on fields that were abandoned due to soil degradation.

Pine Release – A few years following establishment of a regeneration layer of young seedlings, a stand is managed to limit competition of non-target species, particularly hardwoods in a young pine stand. The removal of this competition (by herbicide, mechanical, or fire) releases the young pines to be free to grow.

Planted –In contrast to natural regeneration, the next generation of trees are manually established in a stand after a harvest. Planting provides control over seedling density and arrangement. Planted stands typically have improved genetics (parents were selected for disease-resistance, rapid growth, & good form).

Pruned – Removal of lower branches to encourage a tree’s use of resources for height and stem diameter growth. Pruning limits knotting of wood and creates higher grade timber. 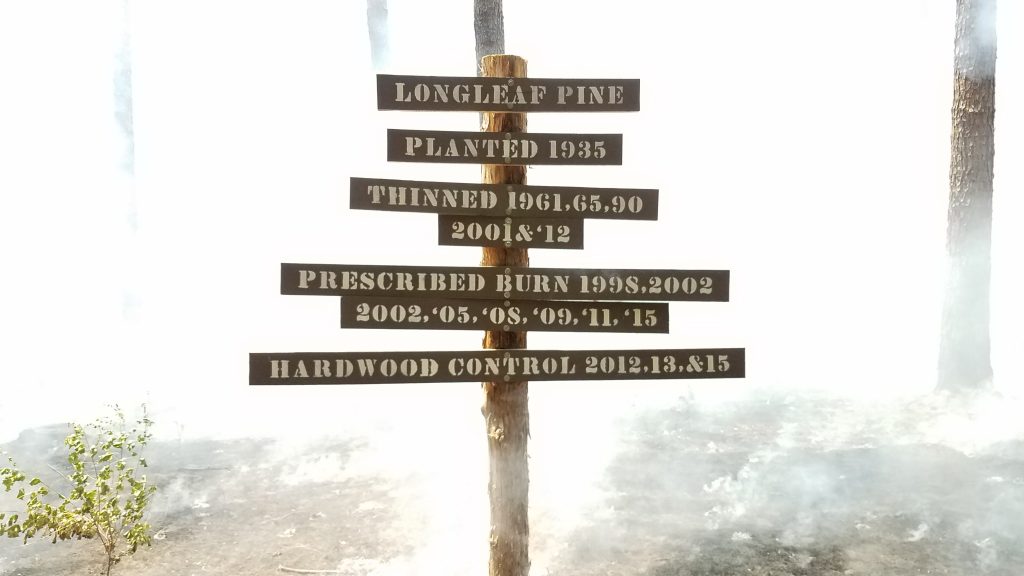 Prescribed burn – Use of intentional fire to enhance growing conditions for a stand’s target species and diminish growing conditions for unwanted and/or invasive species, and many other benefits including: reducing hazardous fuels to prevent wildfires; minimizing the spread of pest insects and disease; improving habitat for many species of animals; and recycling nutrients back to the soil.

Pre-commercial Thinning – Removal of a portion of trees from an even-aged pine stand to provide ample spacing for increased vigor. Pre-commercial thinnings occur early in a stand’s development before the harvested trees have economic value as forest products. Naturally regenerated stands are more likely to require pre-commercial thinning.

Shelterwood Harvest – Removal of a portion of a stand’s trees to create light levels amenable to growth of seedlings for a certain target species. Often used to promote growth of oak and hickory seedlings, Shelterwood Harvests leave more trees than Seedtree Harvests. The trees left in place to create partial shading are later removed upon establishment of the target seedlings/saplings.

Salvage Cut – Removal of economically valuable forest products from a stand whose inventory has become compromised from further growth (by icestorm, hurricane, pest infestation, etc.). Salvage cuts are done to prevent the complete loss of a stand’s value.

Seedtree Harvest – In contrast to a clearcut, several trees per acre are left during a harvest to assist in providing a seed source for natural regeneration of the stand. These individuals are typically the best trees, chosen for superior genetics (straight stem, large height and diameter, and pest/disease resistance).  Seed trees can also provide wildlife benefits, particularly as nesting locations or hunting posts for birds of prey.

Seed Source Removed – Removal of mature canopy trees that were used to produce a new generation of seedlings. These seed source trees were left in place after a shelterwood harvest. Removal occurs once young trees of the target species become established. 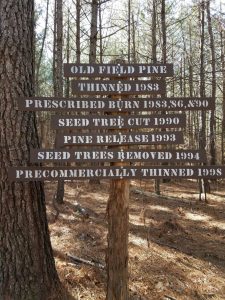 Seed Trees Removed – Once natural regeneration of seedlings occurs after a Seedtree Harvest, the seed trees are subsequently removed to allow full sun to reach the next generation of growing trees.

Site Preparation Burn – Use of prescribed (intentional) fire to enhance growing conditions for a stand’s target species. In Duke Forest, site preparation burns are typically used after a harvest and before a stand is planted. They help create clean ground for planting a target species and are especially important for limiting competition from early-successional hardwoods. 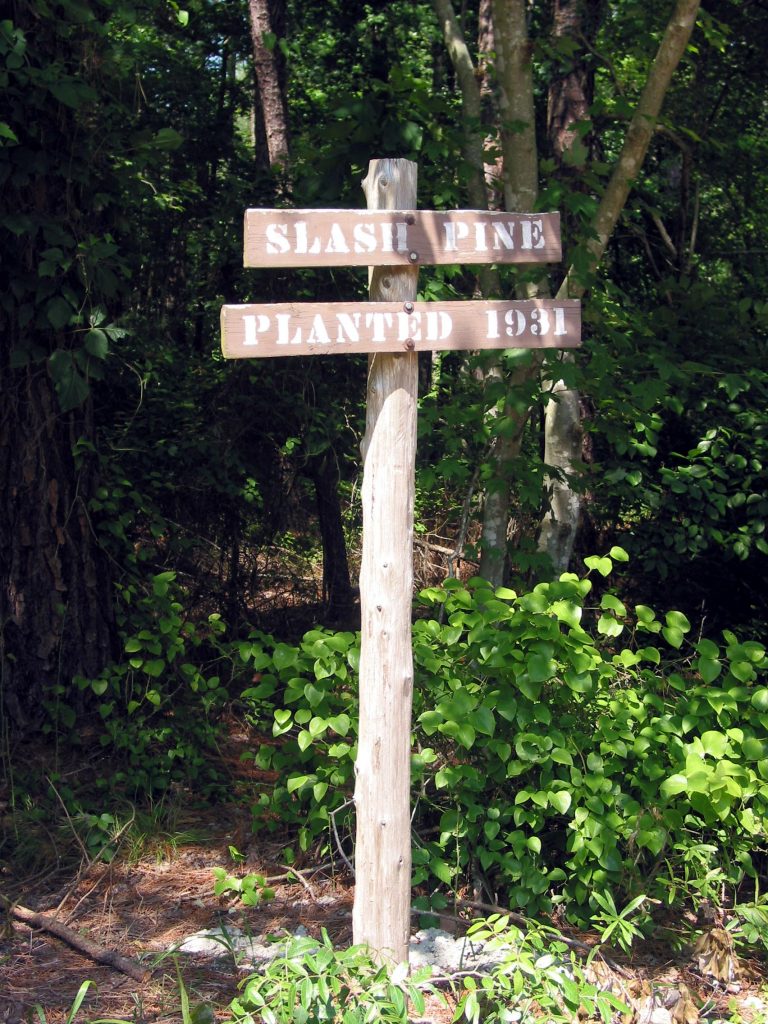 Shortleaf Pine – (Pinus echinata) Historically the most common pine in upland Piedmont forests, often co-occuring with a variety of hardwood species like oak and hickory. Slower growing, shortleaf pine is more difficult to regenerate and is outcompeted in most places by loblolly pine, whose presence has increased across the Southeast due to widespread cultivation. The wildlife value of shortleaf pine has prompted recent efforts to restore its representation in southeastern forests.

Southern Pine Beetle – Native to North Carolina and the Southeast, this tiny (1/8 inch adult) brown beetle matures in and burrows through the nutrient-transporting tissue beneath the bark of pine trees. This degrades the timber and can kill the tree, resulting in millions of dollars of annual losses for the forestry industry. Infestations often begin in overly dense stands where trees struggle for resources. Appropriate thinning can help trees remain vigorous and aid in stand resistance to infestation. 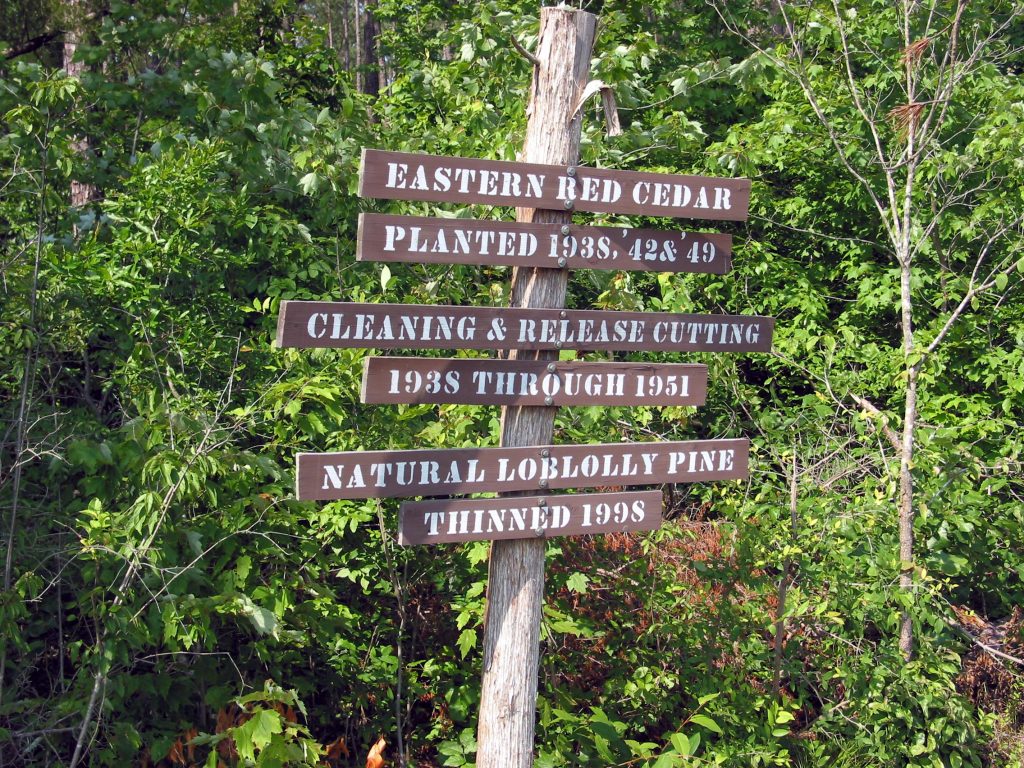 Thinning – Removal of a portion of the trees in a stand.  Thinning is usually done to generate income while minimizing resource competition (primarily light) and promoting maximum growth rate of remaining trees. Thinning operations also support stand health from the removal of trees with defects, disease, and pests. Thinning may also take place to manage a stand’s species composition and regeneration potential.

White Pine – (Pinus strobus) Native to the western half of North Carolina, eastern white pine is not typically cultivated for forestry practices in the Piedmont, although plantations are common in the mountains. White pine is a long-lived species whose attractive timber can be used for a wide variety of uses including flooring, paneling, furniture, as well as general construction.

Thank you to Duke Masters of Forestry graduate assistant Tal Jacobs for his assistance on this project in 2018.