The primary objective of wildlife management in the Forest is to maintain as diverse and complete a population of animals native to the Piedmont as possible. This is generally accomplished by restricting human disturbance in certain habitats and in other areas, employing timber management practices which are capable of creating widely varied habitat conditions.

Examples of wildlife management activities include: increasing the number of stands less than five years in age; harvesting mature timber and developing pine stands; and protecting lowland hardwood communities.  The effective use of undisturbed or carefully manipulated vegetation corridors is another aspect of wildlife management within the forest.

Duke Forest staff and visitors to the Forest have noticed a substantial impact from deer browsing on understory shrubs, herbaceous plants, and tree seedlings.  These casual observations have been confirmed by analysis of data from permanent vegetation study plots in the Korstian and Durham Divisions.

In the spring of 2005, the Office of the Duke Forest conducted a spotlight population survey to determine the abundance and distribution of deer on the Forest.  Volunteers from Duke University, N.C. State University, and the surrounding communities participated in the study. 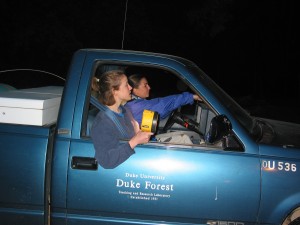 Survey results indicated that population numbers were 3 times greater than “acceptable” levels in the Durham, Korstian, and Blackwood Divisions.  After consulting with several wildlife experts and exploring several alternatives, the Office determined that the only viable population control would be a targeted culling of does through a regulated hunt.

Since 2008, the Office has participated in the Deer Management Assistance Program administered by the NC Wildlife Resources Commission, the state agency that manages wildlife and hunting.  Under this program, hunters are allowed to take does from the Forest that do not count toward regular hunt season limits.