The primary objective of wildlife management on the Duke Forest is to maintain as diverse and complete a population of animals native to the North Carolina Piedmont as possible.  This is accomplished by employing forest management practices that create widely varied habitat conditions.

Examples of wildlife management activities include harvesting mature timber and developing younger pine stands, protecting lowland hardwood communities, and increasing the non-forested acreage (i.e., grassy fields and areas with early successional plants) in all divisions.  The effective use of undisturbed or carefully manipulated vegetation corridors is another aspect of wildlife management carried out on the Forest.  As a result of these activities, the Duke Forest supports a wide array of wildlife species. 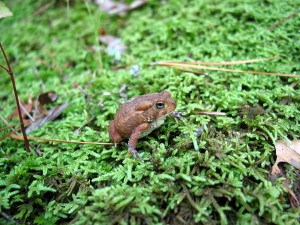 Duke Forest provides habitat for a great diversity of amphibians and reptiles. Over 60 species of salamanders, snakes, turtles, toads, and more can be found here!  Check out the new species list developed by Jeff Pippen and Jeff Beane (click here). 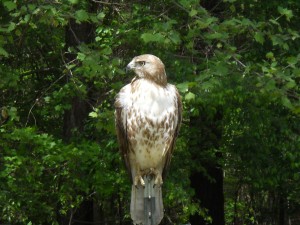 Duke Forest has many documented bird species.  To obtain a preliminary list of the birds found in the Orange and Durham County sections of Duke Forest, click on the brochure image below. 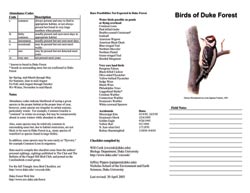 Other bird species common to Chatham, Durham, and Orange counties may also be present in Duke Forest. A comprehensive list of area birds, including rare species, is available through the Chapel Hill Bird Club.

For more information on the birds of Triangle Area: 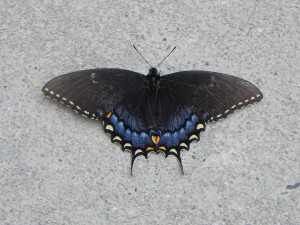 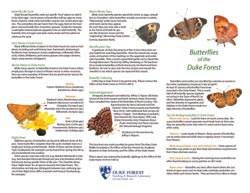 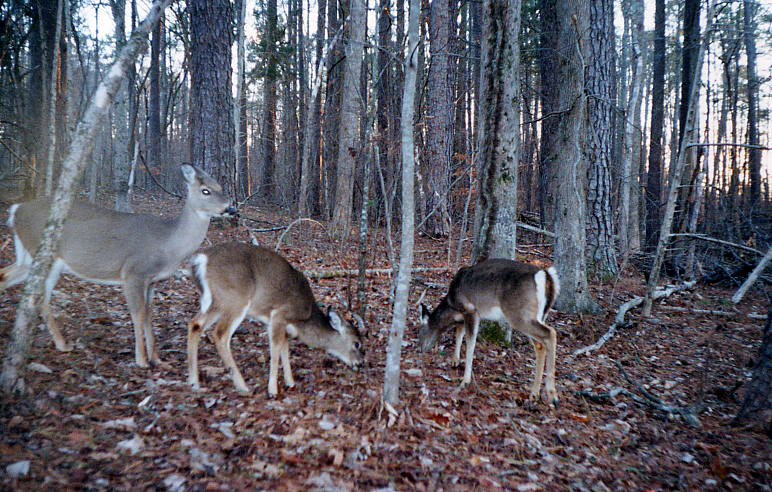 White-tailed deer (Odocoileus virginianus) are a common and widespread species throughout Duke Forest. Around the turn of the century, deer populations in North Carolina were fairly low, but more recently, their numbers have been estimated to exceed 1,000,000.

White-tailed deer live in small bands comprising a family group, while males are solitary except in rutting season. The mating season extends from September to November, but it varies with latitude and can extend into January. Female deer are able to breed at 6 to 7 months but usually do not until 1.5 years of age.  Males are able to breed at 1 year of age; however, due to competition with older males, they usually will not breed until later.  The average life span for a deer is ten years, but they are able to live to twenty.  Adult males may weigh 200 to 300 pounds and can grow antlers 30 inches long.

Deer populations continue to grow throughout their range because they are adaptable to disturbance, such as agriculture and forestry practices, and prefer the edge habitat if adequate forage and cover is available.  These growing populations have led to management problems in Duke Forest and across much of the deer’s range.

Beaver (Castor canadensis carolinensis) communities are found throughout North America in all regions, except the Arctic tundra, Florida peninsula, and southwestern desert. The sub-species Castor canadensis carolinensis is found throughout the southeast to southern Virginia, to northern Ohio, Indiana, Illinois, and west to southeastern Iowa, eastern Missouri, eastern Arkansas, and Louisiana. Beavers have been known to inhabit areas of the Duke Forest along Mud Creek and Stony Creek and the tributaries of New Hope Creek and the Eno River. 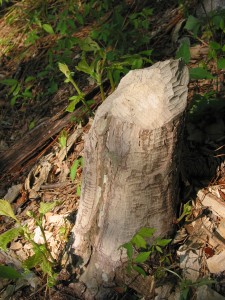 Beavers create ponds that flood vegetation and allow them to feed in aquatic environment. These ponds range in size from less than one to over 100 acres. Suitable beaver habitat contains stable aquatic habitat, channel gradient of 15 percent or less, and quality food species present in sufficient quantity. Beavers tend to occupy valleys that are wider than the stream channel, because narrow valley bottoms cannot support the quantity of vegetation needed by the beavers. Optimum habitat occurs in large lakes or reservoirs that are at least 20 acres in surface area and have irregular shorelines.

Beavers are herbivores: their diets consist largely of fresh herbaceous matter and they rely on a food cache of woody vegetation during winter months. Preferred foods include aquatic vegetation, such as duck potato (Sagittaria spp.), duckweed (Lemma spp.), pondweed (Potamogeton spp.), and water weed (Elodea spp.). Beavers have few natural predators, but they may be preyed on my wolves, coyotes, lynx, fishers, wolverines, bears and humans.

Eastern wild turkey (Meleagris gallopavo silvestris) is the most widely distributed subspecies of wild turkey. They are found throughout eastern North America in hardwood and mixed conifer forests. Wild turkey range extends from New England to southern Canada to northern Florida and west to Texas, Missouri, Iowa, and Minnesota. Wild turkey have been observed in portions of the Duke Forest located in Alamance and Orange County. 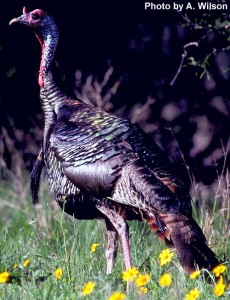 Ideal wild turkey habitat includes a contiguous forest tract of 5,000 acres or more, preferably a hardwood forest with grassy openings. Their range is wide but variable depending on season, food supplies, and habitat type/quality. For example, birds may roam only a few hundred acres during one season, or they may cover several thousand acres annually. Wild turkeys are very adaptable to both habitat and range requirements, due in part to their diets. While acorns are preferred, they also feed on a wide array of mast, buds, fruits, grasses, seeds, insects, green vegetation and small animals.

Males (gobblers or toms) may weigh twenty pounds or more while the females (hens) weigh ten to twelve pounds. Despite their size, wild turkeys are able to fly at speeds of up to 50-55 miles per hour. Wild turkeys have size-based calls: the cluck, alarm, putt, yelp, whistle or kee kee for young birds and tree yelp and gobble of mature males. These calls vary with sex and age in pitch, tone quality, volume, and inflection. Although birds may live up to ten years, the average life span is less than two years. Predators do not pose a serious threat: bobcats, foxes, raccoons, skunks, owls, hawks and snakes are all natural turkey predators.